Stand out of the fake symbiosis of producers and consumers full of greed; you are now part of our green revolution – for saving ‘ourselves’, for saving ‘humankind’, for saving ‘life’. 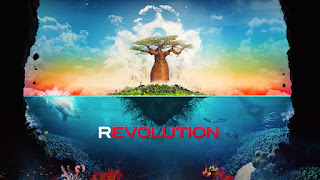 I truly get more inspiration by Robert Brian Stewart himself as the director of the movie (documentary) and the little boy in the movie who visits the UN Climate Change Coalition’s Conference in Mexico for the purpose of saving life from the catastrophic effects of climate change. The emotional scenes make us think twice and reflect on what we have been following in our daily lives – this should shake our lords (producers of the consumer goods that we consume) and wake them from a deep numbness of ‘competition’. The movie is embedded at the bottom of the blog; and I strongly recommend you to take some seconds to read my blog-review on the movie before deciding to scroll down for it.

The characters in the movie – a biologist, a young activist, an indigenous activist, a teacher, students scientists and all have their stories to share and together one can make a theory explaining what has been happening to the oceans, marine biodiversity and ultimately the life on earth because of the corporates that rule the world,our governments, and ultimately us.

We blame on corporates for their competition on resources and profit-making. We blame on governments being unable to exercise that copes with sovereignty of people. We blame on this and that, but we failed to reflect critically on our actions .. this is the important missing line in the theory of climate change. So, the ‘revolution’ for reversing the climate change and other effects like ocean acidification, improving the support systems to ascertain life on earth we need to act to change ourselves and on parallel act together for making our earth a place to live. I intentionally omitted the word ‘better’ – because scientists also in this documentary are warning a threshold trigger that would permanently damage the life support system on earth.

A young film-maker from Canada who is already recognised by Toronto Film Festival, who is among us in the revolution to save life on earth, deserves gratitude from me whose team found me over internet and provided the movie for me to watch and share my thoughts on it. I will be getting a DVD from him shipped to me, I will be giving that DVD to a school in Nepal which has successful stories on producing greener generation of young graduates. Let me see which institution could be that.

I intentionally omitted the word ‘better’ – because scientists also in this documentary are warning a threshold trigger that would permanently damage the life support system on earth.

I am pretty sure that you might wish to see the movie if I add some key features of it: inspiring on-the-ground-story plot, life threatening risks, beautiful life under the ocean, science and indigenous knowledge, change that has already started, governments that bow down in front of corporates’ interests, power of transformative education and many more. If you pay some amount to view it, one dollar goes to WWF – the worldwide fund for nature.

<< UPDATE: Yekra Player could be closing very soon according to them. So, please visit the website http://therevolutionmovie.com/ >>

Now, the embedded movie is just below. Let us transform our deeds for life on earth !

Revolution is a feature documentary about opening your eyes, changing the world and fighting for something. A true life adventure following director Rob Stewart in the follow up to his hit Sharkwater, Revolution is an epic adventure into the evolution of life on earth and the revolution to save us.

Discovering that there’s more in jeopardy than sharks, Stewart uncovers a grave secret threatening our own survival as a species, and embarks on a life-threatening adventure through 4 years and 15 countries into the greatest battle ever waged.

Bringing you some of the most incredible wildlife spectacles ever recorded, audiences are brought face to face with sharks and cuddly lemurs, into the microscopic world of the pygmy seahorse, and on the hunt with the deadly flamboyant cuttlefish. From the coral reefs in Papua New Guinea to the rain forests in Madagascar, Stewart reveals that our fate is tied to even the smallest of creatures.

Through it all, Stewart’s journey reveals a massive opportunity, as activists and individuals all over the world are winning the battle to save the ecosystems we depend on for survival. Presenting the most important information on human survival and inspiring people all over the world to fight for life, Revolution is essential viewing for everyone. Startling, beautiful, and provocative, Revolution inspires audiences across the globe to join the biggest movement in history that’s rising to the challenge of saving our world.

Climate Change to be in Secondary Curriculum

Education in Developing Countries: in the context of Nepal