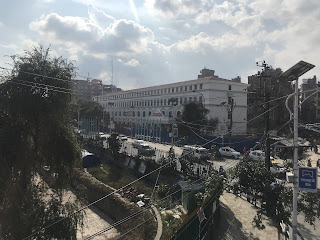 The reconstruction work of Durbar High School is almost complete. The massive earthquakes in April-May 2015 damaged the previous building requiring an intervention. The new iconic building extends approximately 90 metres along the road that separates it from Ranipokhari – a historical pond in the heart of Kathmandu which is also currently in reconstruction phase. The building in the past had almost similar outlook as the newly constructed building. It used to host two institutions – Bhanu Secondary School (popularly called as Durbar High School) and Sanskrit Secondary School. These 2 schools are temporarily relocated in Pradarshani Marg (Bhrikutimandap), Kathmandu.

Now the school building reconstruction has been completed, what’s next?

2 institutions of school education may quietly come back to the original arena in the heart of the city amidst the chaos of markets, traffic of automobile. But after the investment of enormous finance, efforts, and intellectual discourses, it will definitely be a gross negligence educational planners owing to the environment where pupils of ages 5 to 16 enroll. Most probably, the school management committees of both institutions can decide to run the schools from pre-primary levels to higher secondary levels, resulting the premises be utilised for educational development of toddlers of ages as low as 3 to young students of ages till 18. The noise and air pollution plus aesthetic pollution caused by the running vehicles and existing markets to the Jamal side and Bhotahity side of the building definitely takes the situation away from the quiet, calm and safe environment. For correcting this, the road that runs parallel to the length of the building can be made underground ! While automobiles run under the ground, children can have quiet and safe school-park adjacent to the reconstructed Ranipokhari pond.

Having two different institutions (with definitely 2 different names) can be little problematic to be run in the same premises. In fact, Nepalese schooling system in 2020 can make provisions for a same institution to run General stream, Sanskrit stream, or Technical stream of school education. To take advantage of the situation, unification of the Sanskrit school and the old Durbar school can be made, with guarantee of 2 streams of school education. If possible, the school can add technical stream as well. But this depends on the demand of labour market and willingness of students themselves and confidence of their parents.

Opportunity for being a model public school
In the history, the school had entertained the thirst of education of children of elite families. Contrarily, in the present, the school (as with the case of most other public schools of Nepal) has been perceived as the school of children of urban marginalised. Of course, the school offering free public education has been one of the educational hope of the pupils of the urban poor. However, the defining terminologies that come in popular cognitive universe are – schools of savage children, no discipline, no competent teachers, careless school management, and so on.

There have been many public schools (In my observation, the government often pushes itself to add the term ‘model’ in the name of such schools.) who have been objectively successful in being competitive with other successful private schools in terms of quality teaching-learning environment, and results of national examinations. This fact signifies that; upon proper planning, execution and timely review, this school now has opportunity to become a model public school in Nepal.

However, we should be aware that, the school should not ask ‘fees’ of any form from the poor parents.