One day conference on ‘Education for Sustainable Development : Nepalese Perspectives’
Date: January 9, 2013
he Sustainable Education Group-Nepal (SEG-N) supported by Nepal Tourism Board (NTB), Green Hub Private Limited, ICIMOD, Geneva Global School, www.nepalitelecom.com and Centre for Climate Change-Nepal organized a one day conference on ‘Education for Sustainable Development: Nepalese Perspectives’, that was held on January 9 at the lecture hall of Nepal Tourism Board.
A total of 30 participants including six organizer members took part in the event. Many of the attendants were the students of M.Sc. Environmental Sciences, teachers and other stakeholders. The conference was held with an eye to providing a platform to the students, who live across the country and aspire to contribute to sustainable development and stakeholders so as to express their take on and experiences on the theme ‘Education for Sustainable Development’. 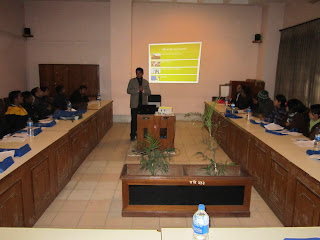 The conference was split into three sessions and was commenced by the organisation’s treasurer, Subhash Thapa Magar. Parbat Dhungana, a highly experienced lecturer at Kathmandu University, was the keynote speaker at the conference. He lighted the possible ways of going through the path of sustainable development; also mentioned that education is that sort of light which he was delivering. Though seven attendants were scheduled to deliver presentations on different issues, only five of them could give on the grounds of the limited time. All the presenters explained their views in layperson’s terms. Speaking at the conference, the keynote speaker laid emphasis on the critical thinking, participatory class and interconnectedness among knowledge, skill, attitude and behavior. Moreover, he encapsulated the category of development in different terms and contradictions regarding the definition of development. 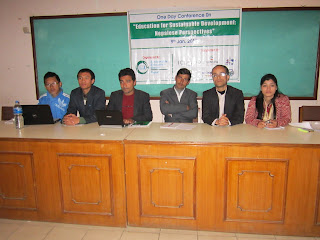 Secretary of SEG-N, Rajendra Kattel suggested that the school that entails economy, environment and entrepreneurship can be greener if planned and implemented well. Also, he emphasized the theme ‘One village-one school-one production’. Another presenter, Rajib Khanal shared his views on modern education. Likewise, Subash Duwadi gave a presentation on Climate Change Adaptation Education. His presentation was regarded more noteworthy than the rest as climate change has been triggering dire impacts on human lives and biodiversity. Yet, a large number of people are not well aware of adapting to climate change and its causes.
At length, the president of SEG-N, Dipesh Dulal shared the conceptual ideas about edublogging and its necessity in the present. Highlighting the contributions of supporting partners, conclusions drawn after interactions, concerted efforts of presenters and precious time of attendants, he made a strong commitment to organize this sort of programs in the future if other institutions support and work together. The conference was wrapped up by putting hands up altogether to agree on the slogan ‘Let us carry on our ESD agenda even after 2014’ being aware that the UN decade for ESD (DESD) was coming to end from 2005 to 2014. 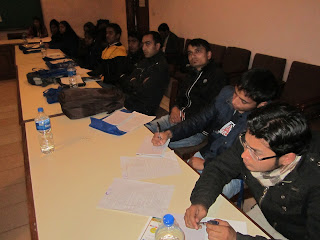 Education is one of the vitality, which plays significant roles in developing a country. Despite many contradictory ideas about development, development is inevitable and indispensable for humankind. Development should not be destructive but sustainable, practical and productive. When development activities are carried out, other aspects should not be affected. This is what participants learned.
Submitted by
Amar Sherma (Limbu), MA English, second year, RR Campus, an English teacher at Chelsea Int’l Academy and the Vice-secretary of SEG-N
Related Articles

Which Words Describe You?

A natural way to life